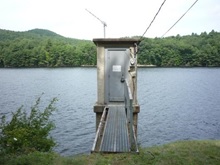 Consistent with the USGS planned conversion from National Geodetic Vertical Datum of 1929 (NGVD29) to the North American Vertical Datum of 1988 (NAVD88), the Hudson River – Black River Regulating District will be upgrading the datum used to record water level elevation at all of its reservoirs.

Effective February 1, 2019 the datum at surface-water and ground-water stations operated by the Hudson River – Black River Regulating District in partnership with the USGS will be converted from the National Geodetic Vertical Datum of 1929 (NGVD 29) to the North American Vertical Datum of 1988 (NAVD 88).

NGVD 29 has been the benchmark used by surveyors and engineers as the standard position from which measurements are taken. Originally called the Sea Level Datum of 1929, it was created for vertical control surveying in the United States, and is what is referred to by the inaccurate term “sea-level.” The sea itself is not level, but is subject to variations caused by currents, wind, barometric pressures, temperature, and the topography of the sea floor. Because mean sea level at one location can be quite different than mean sea level at another location, it is not an accurate benchmark for measurement. Satellite technology has also discovered ground elevations that have risen or fallen due to geological activity and the effects of gravity.

Technological advancements have created the ability for greater accuracy, resulting in the North American Vertical Datum of 1988 (NAVD 88). The NAVD 88 was completed in June of 1991, contains an additional 100,000 miles of leveling and was constrained only to the primary tidal benchmark at Father Point/Rimouski, Quebec, Canada. It is a great improvement over its predecessor in terms of mathematical techniques employed as well as being based on the Earth’s observed gravity field. NAVD 88 is compatible in principle with the Geoid, the mathematical system of describing the relation of the Earth’s gravity field to elevations.

All federal agencies are required to use NAVD 88. The US Army Corp of Engineers, the Federal Emergency Management Agency and United States Geological Survey have all adopted the new datum.

For the rivers, streams and reservoirs that are monitored by the Regulating District within the Black and Hudson River watersheds, the NAVD 88 elevation number is a shift of approximately .88 to .11 feet lower than the elevation in the NGVD 29 standard. This variation is due to geographical differences. For example, a water level for the Great Sacandaga Lake is 771.00 ft. and will be 770.12 in the NAVD 88 standard. The difference is referred to as the “shift between datums”. Only the numerical value for the elevation changes; the depth and volume remain the same.